Besides enjoying and understanding the exist culture in the west Nusa Tenggara, people can also enjoy its art of music, dances and drama. There kinds of art are : 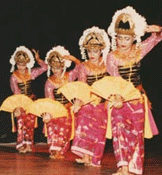 The most popular art in the socitery of Lombok, where the course of the story is strongly imfluence by the Javanese culture.

THE “ GANDRUNG “ DANCE
The “gandrung “ dance is performed by a young girl dancer, usually performed in the open air accompanied by “ Gamelan “ ( music ).
The “ Gandrung “ dance has a unique performance. They dance with a fan and when the dancer touches her fan to one of the spectators ( usually male ) it means that the male who was touched by the fan is invited to dance together with the gandung dancer in the performance arena.
Gandrung means a prolonged expression of brave and materialized in the form of movement sand dance we can find this dance in several villages in Lombok and often performed in Lenek village, east lombok regency.

The rabana qasidah team, that is zikir recitation with “ rebana “ ( tambourine ), has been known since long ago in several parts od Lombok now the modem “ Rabana Qasidah “ is developing since the National MTQ ( Musaba Qah Tilawatil Qur’an ) learning to read/ recife the Qur’an wasnel in mataram. Almost in every village in lombok we can find Rebana Qasidah associations, the players consists of girls between 8-12 in number.
The songs sung by them have generally the spirit of Islamic education. The show of this music is usually held at night to make any festivity more lively.

BALANJAKAN.
Belanjakan is one of the kinds of foik dance which is still living especially in the masbagik district in east lombok.
Belanjakan derived from the world “ lanjak “ meaning to kick with heel or foot-sole. So in this game the main movement is to kick with heel . this game besides having consolation function, Is also competitive in nature. To promote the skill to play belanjakan spare time after harvest is used. They do the exercises together and than rule is given which has to be commonly honored. Send from the point of view of technique and rule of the game, the game is education a elements as to promote the sense of bravery sportsmanship, self – confidence it is carried out between groups of other villages.

THE “ BETEK BARIS “ DANCE.
This kind of dance is in fact performed with movements of a march, imitating the Dutch solider of the past that is why that the orders for the march are mostly given in Dutch pronounced in the sasak dialect and accent.
The betek baris is usually accompanying and adat procession. To day there is only one association left accompanying mainly the ceremonies/ processions of Pura Lingsar In west Lombok.

This dance is part of an adat ceremony called “ ngayu ayu “ from sembalun village. East Lombok regency, which from a series of ceremonles involving the whole village in habitants of sembalun Bumbung. The dance consist of 8 soldiers, 6 mean acting as solders, one man carrying a “ sumpit “ ( a blow-pipe arm ) and the other one man acting as their “ pemating “ ( leader ) these dance movements are directed to express thanks to God almighty, besides an effort to remain being vigilant.

PERESEAN
Peresean is a very popular handy and skillful performance amongst the lombok people and this folk-performance can be seen at a certain ceremony. This performance is conducted by two young men competing physically armed with a rattan stick and a shield made of low-hide. Third performance is accompanied by music and lead by a referee known as “ pekembar “ he has the right to decide who is the winner or the looser in this competition.

THE “ GENDANG BELEK “ DANCE
The “ Gendang Belek “ is one of the dance from Lombok. To be named so, since it uses a blg “ gendang “ ( drum ) in the hold times this dance is performed to company or to welcome soldiers going to or coming from the field of battle. This dance is often used to welcome important guests. As an art of performance also often named as “ tari oncer “ ( oncer dance ).

RUDAT
Rudat is a sasak traditional dance, performed by a group of young men . this dance is a combination between and Islamic culture in general ans sasak traditional culture in particular. This dancers usually sing rudat rhythmic songs which contain teachings and the implementation of the Islam religion . the dancers usually have colorful clothes complete which a hat and other ornaments.

KAYAK SANDO
Kayak sando is one of the many types of regional dances taken from a people’s story which is found only in central and east Lombok. A specific feature in this dance is that all dancers wear masks . this dance is often performance in official adapt ( custom ) ceremonies or to en liven regional ceremonies.

CUPAK GERANTANG ( LOMBOK )
This Panji Semirang, which has its origin in Bali was taken by Sasak artists into an operate which was given the name of Cupang Gerantang. This operette is usually known to enliven marriages and circum cision ceremonies. A Cupak Gerantang show is usually performed the whole night long, as from nine o’clock up to four in the morning.

BARONG TENGKOK
Barong Tengkok is a show usually performed during a procession to accompany a bride and bridge room of a wedding ceremony or during circumcision.

KECIMOL DANCE. Kecimol is one of the kinds of traditional music from the kabuaten or Lombok Timur in the village of Lenek, Kecamatan aikmel. The instruments consists of a gambus ( an Arabian six stringed lute). A gendang jidur ( drum ), a mandolin operate flute and a violin. The lyrics consists of educational and monitions or expressions of young people in love, this type of music has developed in several Kecamatan in the Kabupaten of east Lombok.

BAJANG GIRANG DANCE.
The dance is a expression of feelings of young people who always intend to be merry. In the sasak language the word Bajang Means young and Girang means Merry young people some times are feeling disappointed, sad or distressed, however they cannot afford to feel desperate. This is hoped to be shown in the Bajang Girang dance.